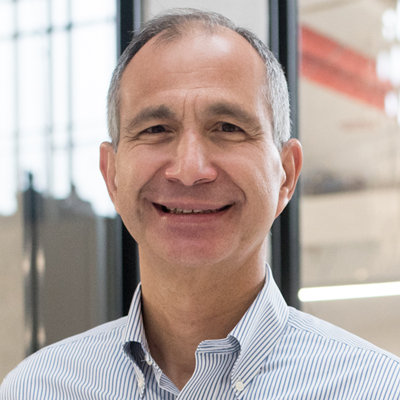 Professor and Chair, Department of Electrical and Computer Engineering, University of Texas at Austin

Ahmed H Tewfik received his B.Sc. degree from Cairo University, Cairo Egypt, in 1982 and his M.Sc., E.E. and Sc.D. degrees from MIT, in 1984, 1985 and 1987 respectively. He is the Cockrell Family Regents Chair in Engineering and the Chairman of the Department of Electrical and Computer Engineering at the University of Texas Austin. He was the E. F. Johnson professor of Electronic Communications with the department of Electrical Engineering at the University of Minnesota until September 2010. Dr. Tewfik worked at Alphatech, Inc. and served as a consultant to several companies. From August 1997 to August 2001, he was the President and CEO of Cognicity, Inc., an entertainment marketing software tools publisher that he co-founded, on partial leave of absence from the University of Minnesota. His current research interests are in cognitive augmentation through man-machine symbiosis and mobile computing, medical imaging and brain computing interfaces. Prof. Tewfik is a Fellow of the IEEE. He was a Distinguished Lecturer of the IEEE Signal Processing Society in 1997 – 1999. He received the IEEE third Millennium award in 2000 and the IEEE Signal Processing Society Technical Achievement Award in 2017. He was elected to the positions of President-elect of the IEEE Signal Processing Society in 2017 and VP Technical Directions of that Society in 2009. He served as VP from 2010-2012 and on the board of governors of that Society from 2006 to 2008. He has given several plenary and keynote lectures at IEEE conferences.